Ammonia on the Brain: Breaking Down Hepatic Encephalopathy by Jessica Horowitz 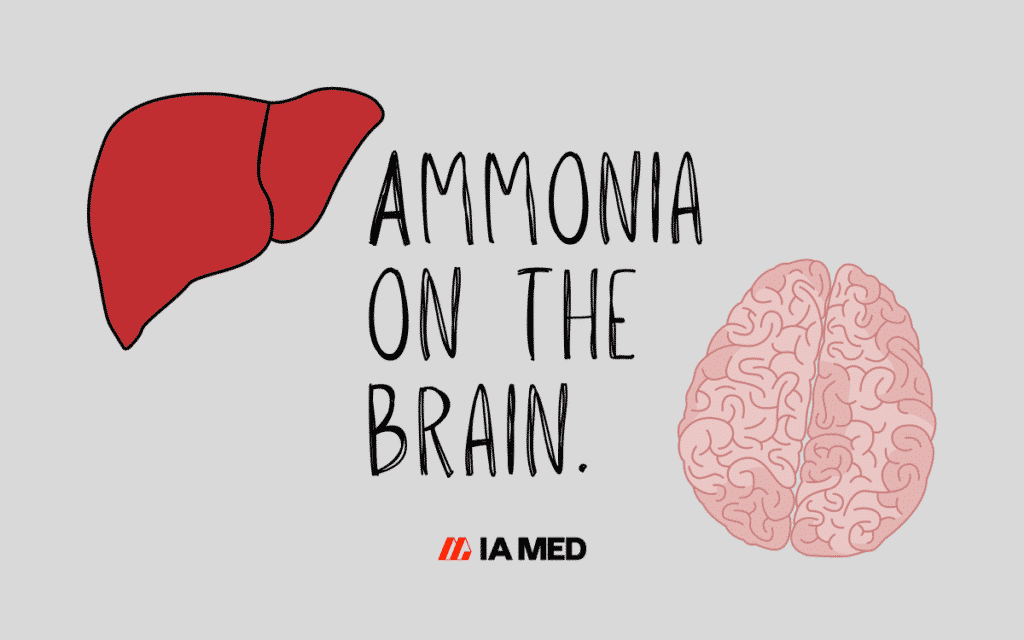 Ammonia on the Brain: Breaking Down Hepatic Encephalopathy by Jessica Horowitz

Tones Drop and dispatch tells EMS that they are going to visit a 55-year-old male with abdominal discomfort and altered mental status.

After a few minutes, the ambulance arrives on scene to an apartment and the PT’s wife tells you that her husband not only has abdominal pain but isn’t making sense, is irritable, and doesn’t seem to know where he is.

The wife also informs EMS that the PT has a history of liver disease and has been recently sick causing him to not eat or drink much. When you first see the PT, the first thought is that the PT looks about 8 months pregnant, but that diagnosis quickly goes out of the window as the PT is male and is not transgendered.

It becomes apparent that the PT’s abdomen is full of fluid and that his liver disease is causing ascites. Blood glucose is normal. No alcohol or drug use. No falls or head whacks. No previous stroke, dementia, memory problems, and this has never happened before. Blood pressure is within normal ranges, as is capnography, SPO2 and there are no acute EKG changes.

Besides dehydration and ascites, what is wrong with this PT?

According to the AASLD Practice Guideline for HE in Chronic Liver Disease the definition of HE is a brain dysfunction caused by liver insufficiency and/or portosystemic shunting and manifests as a wide spectrum of neurological/psychiatric abnormalities ranging from subclinical alterations to coma.

Simply put, the liver for some reason isn’t doing its job of filtering out waste products and this causes neurologic and psychiatric manifestations.

HE is described using four axes:

HE is classified into three categories:

From there, HE is further categorized using the West Haven Criteria which grades the severity of mental status changes, psychomotor changes, and neurologic changes. HE can be episodic, recurrent, or persistent.

HE can occur spontaneously or have a precipitating factor such as illness, constipation, hyponatremia, sedative drugs, dehydration, GI bleed, vasodilation, shock, hypoxia, and anemia. Acute HE often causes brain swelling leading to herniation, while HE from chronic liver disease can often be managed.

HE is likely caused by multiple contributing factors, but hyperammonemia is cited as one of the main causes.

Hyperammonemia occurs when ammonia is not converted to urea. If ammonia rises rapidly, such as in Acute HE, brain edema can occur. In high concentrations, ammonia can cross the blood-brain barrier which results in neuronal dysfunction.

Within the brain, astrocytes convert ammonia and glutamate into glutamine which acts as an osmolyte, further increasing cerebral volume. Reduced muscle mass, commonly seen in liver disease PTs, further reduces the sites of ammonia detoxification. Increased activity of GABA receptors, inflammatory responses, cytokines, and magnesium have also been implicated as playing a role in the development of HE.

If the HE is precipitated by something, then the precipitating factor is treated and the HE usually will resolve.

As behavior and cognition changes are often the hallmarks of HE, there are multiple differential diagnoses which have to be considered such as:

So, with all of this knowledge of HE, where does it leave the providers in the aforementioned scenario?

EMS care will not change the course of HE and it can’t be diagnosed in the field. Supportive care, rule out of stroke, rule out of common reversible changes in mentation, and a good history that will paint a very clear picture for the physician at the hospital.