Arterial Lines: Let’s Take This Up a Dicrotic Notch

Arterial Lines: Let’s Take This Up a Dicrotic Notch

If you haven’t been able to tell by now, hemodynamics is one of my favorite critical care concepts. In a previous blog article, “Arterial Lines 101”, I discussed the basics; what your A-line should look like, what each point means, and how to tell if you are over or under dampened.

This blog will kick it up a notch (pun intended) and go over some less commonly witnessed, but very important, to recognize waveforms that can be noted on the A-line. Some of these waveforms can be used for diagnostic purposes, and others can be used to save a life – really! 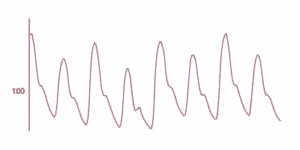 I try to learn something new just as often as I can. Further down the page is a snapshot I took of this particular waveform on a real patient. At the time, I didn’t know the name of this particular waveform. However, just from knowing the physiology of how an arterial waveform is created, I assumed it had something to do with regurgitation. After doing some research, I found out I was right… but that there was so much more to it than that. So without further ado, let me introduce you to Pulsus Bisferiens!

Pulsus bisferiens also referred to as a “Spike and Dome pulse,” occurs when there is a single central pulse wave with two different peaks that are separated by a mid-systolic dip. A double systolic pulse is noted in these individuals but rarely is palpable. A normal central pulse has two waves, the larger wave being the percussion wave and the smaller wave being the tidal wave. These typically happen in very quick succession and are extremely difficult to distinguish. Some pathological conditions make these “double pulses” exaggerated by a wide mid-systolic gap that, in turn, results in two distinct waves (Goudar & ElBebawy, 2020).

The most common conditions that cause a pulsus bisferiens waveform include the following:

This is the waveform I want you to fold up, stick in your back pocket, and save for a rainy day. This is the big one. Early detection can literally save a life.

The actual definition of pulsus paradoxus is a systolic pressure drop that is greater than 10mmHg during inspiration. This is caused by alterations in the mechanical forces imposed on the heart chambers and pulmonary vasculature. The difference between this waveform and the other two mentioned above is that pulsus paradoxus is not a disease state.  Rather it is caused by an underlying disease process, and treatment should be geared toward fixing the cause of the waveform. For instance, if this waveform is present in cardiac tamponade – an emergent pericardiocentesis should be performed. If a tension pneumothorax is the cause, a chest tube for decompression should be placed (Dam, 2021).

A few weeks ago, I made a PowerPoint presentation on the basics of arterial lines for our new graduate RNs. I decided to throw in a few “fun” waveforms at the end, and when I came to pulsus paradoxus, I told them, “this is probably something you won’t see but maybe a handful of times in your career.” Two days later, we received a possible stroke patient brought in by EMS and intubated in the field.

A resident listened and stated that he heard bilateral breath sounds, and the patient was quickly rushed to CT, where I met with the patient and the resident. After which, the patient was taken back to her room, and treatment began. The resident was placing an arterial line, and a good waveform was noted and was setting up to start a central line. Before starting on the central line, the patient’s O2 saturation dropped to the mid-60s. The patient was disconnected from the ventilator and manually ventilated with an Ambu bag. The patient then started to get a little more difficult to ventilate. The resident then stated, “oh wow, her pressure just tanked.” I turned around and immediately noted pulsus paradoxus on the monitor. I informed the resident, and due to the increased effort it took to bag the patient and pulsus paradoxus noted on the waveform, it was assumed that this patient had a tension pneumothorax. A chest tube was inserted, and a chest X-ray was obtained where it was noted that the ETT had actually been placed in the right main stem.

The patient’s monitor is shown below: 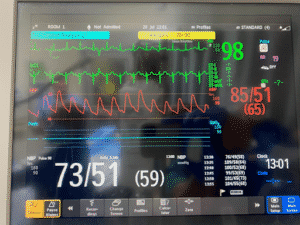 There are several lessons to learn from this patient, but the one that ties in with this blog is to know your waveforms! While, yes, this may be only something you witness a few times in your career, it could be the difference between life and death for your patient.

Imagine if this patient had been flown. They auscultate breath sounds bilaterally before getting into the helicopter. Let’s just say it wasn’t a main stem intubation, and instead, the patient just had a small apical pneumothorax. After ascending to altitude, due to Boyle’s law, the pneumo expands, and now you have a tension pneumothorax. If you had an arterial line in this patient, you could notice this a lot earlier than waiting for the later signs. You would know that it was time to decompress the chest.

I’ve compiled a list of some of the main reasons you can see pulsus paradoxus on an arterial line waveform. Those in red are emergent and need to be addressed immediately.

That’s all for today’s hemodynamic tidbit. As always, stay safe!