Cause of Death: A Broken Heart… 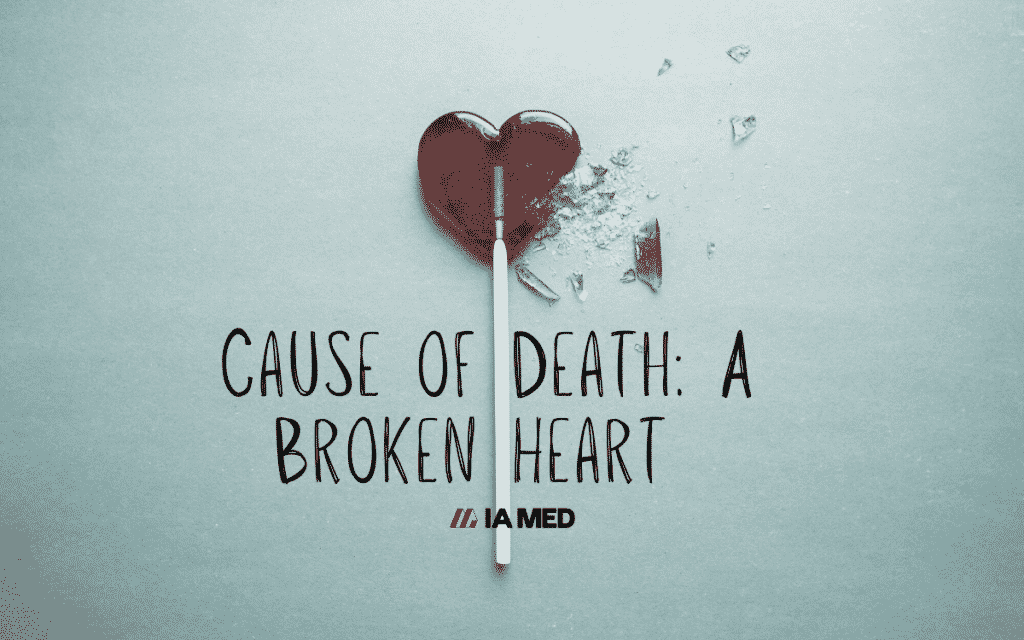 Cause of Death: A Broken Heart…

From country lyrics to inspirational quotes, “dying from a broken heart” is a widespread line. But, who would have thought that you can actually die or suffer from heartache? I am not talking about the type of despair that Spencer and Heidi from “The Hills” caused us in 2010. Were talking about extreme emotional and devastating stress to the body. This “broken heart” syndrome is called Takotsubo Cardiomyopathy.

So what exactly is Takotsubo Cardiomyopathy? First named in 1990, takotsubo “is an unusual form of acute cardiomyopathy showing left ventricular apical ballooning. It is often triggered by intense physical or emotional distress” (Merchant et al. 2008). The shining light in this cardiomyopathy is that it is REVERSIBLE! The apical ballooning is significant, as this is what gives the cardiomyopathy its name. Takotsubo comes from the Japanese word for an octopus trap, “Tako-Tsubo”. With increases in stress response, the left ventricle of the heart forms into a similar shape as the octopus trap. From 1989 to 2007 there was noted to be a significant increase in publications, as Takotsubos was gaining popularity.

“this condition probably accounts for 1% to 2% of all cases of suspected acute myocardial infarction.” (Akashi et al.) 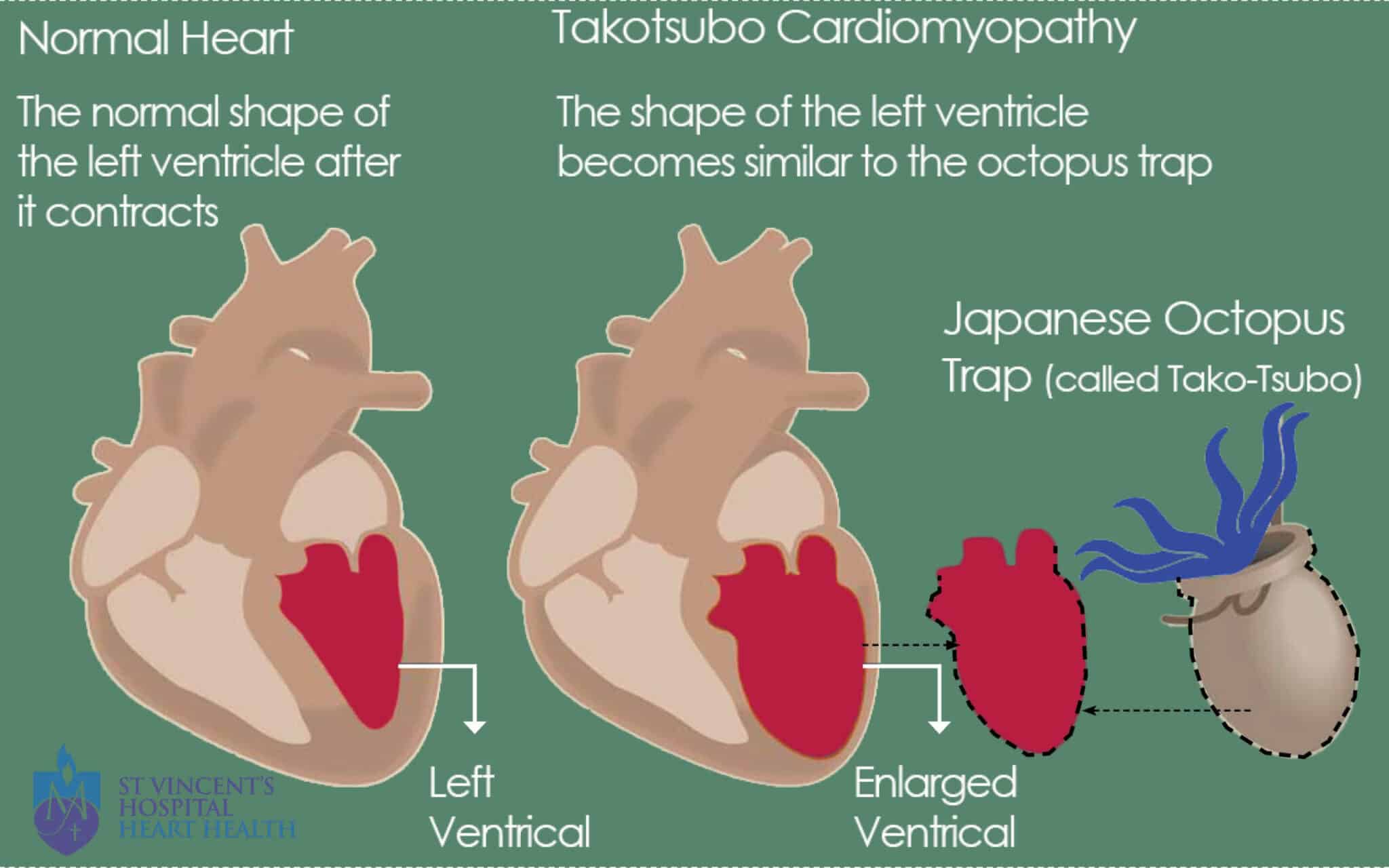 As we stated before Takotsubo results from an extreme stress response from an individual. This condition occurs mostly in post-menopausal women but can occur in men. These patients usually present similar to an ACS. Signs/symptoms of chest pain, diaphoresis, SHOB, EKG changes with ST-elevation in V3-V6, and increased cardiac markers. QT intervals are also noted to be increased. The caveat to this is that upon angiography there are no significant findings of coronary stenosis. Upon further examination with ECHO, it is noted that the left ventricle abnormalities along with a significant balloon shape. It is important to note that Takotsubo is and should be treated as an ACS until proven otherwise.

Hypokinesis, akinesis, or dyskinesis of the left ventricle

Absence of obstructive plaque on angiography

Absence of myocarditis or pheochromocytoma

“Wittstein et al subsequently showed that in the acute phase, patients with TTS have increased concentrations of plasma catecholamines (ie, epinephrine, norepinephrine, and dopamine) and stress-related circulating neuropeptides that are several times higher than those in patients with STEMI.” (Pelliccia et al. 2017)

The exact pathophysiology of Takotsubo cardiomyopathy is unknown but scientists and researchers have come up with a few enticing hypotheses. Concepts include multi coronary artery spasms, microvessel injury/spasms, neurogenic stunned myocardium, and the most agreed on, catecholamine cardiotoxicity. It is thought that following a stressful event, the sympathetic nervous system is activated and catecholamines are released which causes coronary spasms, and microvessel injuries manifest into symptoms of myocardial infarction. Although serum levels of catecholamines like dopamine, epinephrine, and norepinephrine are not obtained before the event, researchers are finding a substantial increase with Takotsubo myopathy. With a sudden release of stress hormones, cardiac muscle is stunned causing microvascular dysfunction, an increase in afterload by narrowing the outflow tract, and increased oxygen demand all leading to the hypercontraction of the ventricular apex and heart failure. This process manifests the stimulation of systemic catecholamines, which in turn worsens the problem. These characteristics are not usually found in myocardial infarctions. Supporting this theory is the similarities with pheochromocytoma. Pheochromocytoma is a rare endocrine tumor that exhibits high levels of catecholamine secretion that can cause reversible heart failure similar to Takotsubo Syndrome. So to put all that science talk together, we don’t really know how this happens.

Like we stated earlier, the shining light of Takotsubo syndrome is that it is reversible and has limited long term effects. Treatment and management all depend on the severity of the condition, we treat the symptomatic effects of the cardiomyopathy. Treatments range from medications to invasive cardiac assist devices. Prehospital treatment is going to be limited to following your ACS protocols, as we can not diagnose this cardiomyopathy accurately in the field. Takotsubo impairs cardiac function by increasing the load on the heart secondary to coronary artery constriction and hypercoarctation of the LV. During this time oxygen demands increase along with cardiac stress. Common medications used to decrease and resolve the issue range from ACE inhibitors, beta-blockers, and Lasix. These medications help reduce the workload on the heart and decrease the elevated pressures in turn increasing perfusion. Higher acuity patients in cardiogenic shock can be placed on assist devices such as IABP to augment the left ventricle or treated with medication.  Evidence of LVOT limits normal treatment guidelines as inotropic medications can worsen the condition. Also, keep in mind that vasopressor treatment should be limited due to the existing catecholamine surge, phenylephrine is a more common choice if needed. The prognosis from this condition is good as most patients will recover fully from this condition in 4-6 weeks. The initial management and correction of Takotsubo’s is the most important factor. This condition gives a new outlook on symptomatic emotionally distressed patients.