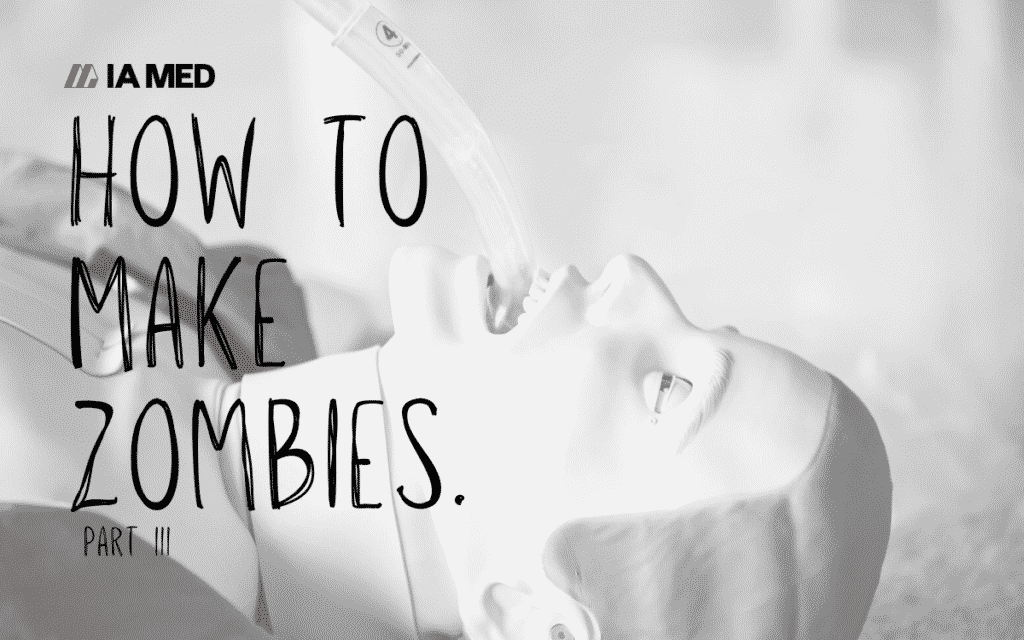 I was at an airway lecture as a baby medic and the instructor said “Airways are sexy. It’s the sexiest, most badass thing we get to do.” Sounds goofy, but he was right: airways are sexy. So, we’ve talked about cardiac arrest physiology, ITDs, Heads-up CPR, and more. All that stuff is fun, but this is the really cool stuff (at least, I think so, because I’m a nerd). We’re gonna get into the nerd stuff on this one.

But we’ve always just tubed them!

Well, yeah, we have. But that doesn’t mean it’s always right. There is so much more new evidence and so many new studies regarding airway management that it can be a maze to navigate. It’s taught from day one of EMT school that airway management is key in cardiac arrest. The problem is that there is too much anecdotal “evidence” provided, which makes it tough to make the right choice. Unfortunately, there’s no “one right answer” to airway management, and it’s left up to us as clinicians, to make the best choice for each patient we care for.

The PART study looked at whether an endotracheal tube or a supraglottic airway resulted in improved rates of ROSC. EMS agencies were randomized and asked to place either a King supraglottic airway (SGA) or an endotracheal tube (ETT) for several months in EVERY cardiac arrest, then asked to swap to the other for the remainder of the study. Out of 3,004 patients studied, they found that the King Tube has a slightly higher rate of ROSC, 72-hour survival and intact neurologic survival at discharge than an endotracheal tube. Many researchers have called for additional, similar studies to verify these results, but the evidence seems to suggest that a King SGA may be more beneficial. On the other hand, the King SGA patients had higher instances of pneumonia and aspiration pneumonitis than the ETT patients did.

Another study was performed by a team at the University of Minnesota to investigate carotid blood flow with different airway devices. Using pigs with induced cardiac arrest, they evaluated an open airway vs. an endotracheal tube, King SGA, Combitube, and laryngeal mask airway (LMA). They determined that carotid blood flow was least impaired by an ETT, then a King SGA or LMA, and that a Combitube was the most restrictive. They also measured ICP with these devices in place and found that an ETT, King SGA, and Combitube had similar effects on ICP, while an LMA caused the least increase in ICP.

Wait, we don’t need to ventilate?

One of the toughest things to teach people is that non-invasive positive pressure ventilation (NIPPV) is not always the best option in a cardiac arrest. The response is usually “WHAT!? But we HAVE to ventilate or they’re gonna die!” Dr. Bobrow proved that, well, maybe not. In his study, he evaluated 1,019 patients and determined that passive oxygen therapy (namely, a non-rebreather mask at 15 LPM) resulted in greater rates of ROSC than NIPPV in witnessed ventricular fibrillation/tachycardia arrests. Unwitnessed arrests had similar results between NIPPV and passive oxygen therapy.

You want some SALAD with that?

What about an airway filled with vomit or blood? Not just a little, but ABSOLUTELY FILLED with gross stuff? We’ve all had those airways, and they’re a pain in the butt to manage. Dr. J. Ducanto found the solution in SALAD (Suction-Assisted Laryngoscopy Airway Decontamination. The Ducanto suction catheter is shaped in such a way that it “lives” in the esophagus during an intubation attempt. Due to its shape and wide-bore opening, it is designed to clear a soiled airway and prevent further contamination. In a study performed by Dr. Ducanto, the confidence level of clinicians improved after taking just one SALAD training course. It’s quickly becoming the “gold standard” for contaminated airway management.