Panic! At the airport 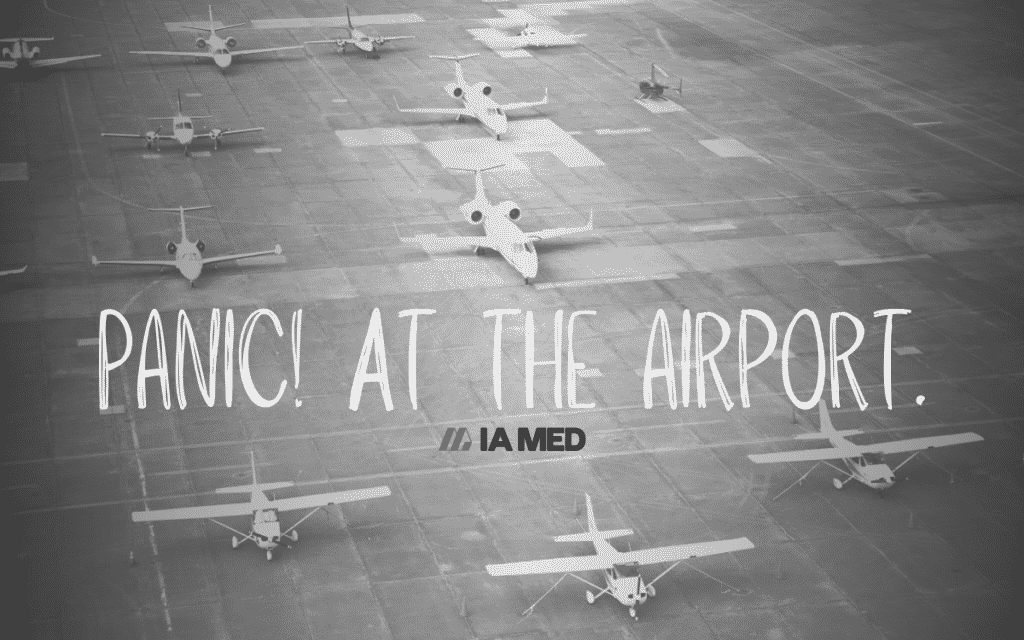 Panic! At the airport

I had let my guard down, which was a mistake and it backfired. The first step after my mistake was to panic, and I think those around me at the time would say I did a pretty good job of it.

4 hours earlier I was relaxing at our crew house and probably arguing about something with my flight nurse partner Sara, who was a brand new flight nurse. Suddenly, our phones chirped;

Medical team, I have a flight request, please copy.

Dispatch was sending us to another city to pick up a peds trauma patient, and our rotor crew based in that city would go to the emergency room, package the kid, and bring him to us at the airport.

They met us on the ramp of their hangar with the kiddo and his mom. He came to the emergency department by EMS after a loss of consciousness. According to mom, he had been out in the garage working with dad when he started complaining of a headache. As it got worse, mom thought she should bring him into the emergency department, but before she could he collapsed. EMS found him unconscious and agonally breathing. They began ventilating him with a bag mask device and transported to the critical access hospital ED that served this little town.

In the ED they found a massive subarachnoid hemorrhage, but no cause. He had fallen and hit his head earlier in the day while playing with the dog, so the pediatric trauma center ruled it a level I trauma and called us.

He was a healthy 6 year old with no medical problems, so I thought I knew what we’d be dealing with. A primary head injury with no comorbidities, my strategy would be to prevent herniation, keep his blood pressure and oxygenation up, ensure he’s sedated and has pain control, and get him to the receiving facility as soon as possible.

Working in a rural area, we have large distances to cover. The flight to the peds trauma center alone would be close to 3 hours. I didn’t anticipate any problems; our medical equipment was plugged into their chargers, our infusions of fentanyl and midazolam mixed in a larger quantity, pressors at the ready if need be. For most of the flight, there weren’t any problems. We talked with mom, Sara charted, and I occasionally chatted with our pilot Kevin.

Our monitor was beeping. Low SPO2. I checked the sticky probe; it was on well. Then the pleth; strong. But his saturations had decreased to 84% and I didn’t know why. His perfusion was okay. I increased the fIO2 to 55% and it didn’t change. I added 3cmH20 of PEEP; his saturations increased to 91%. Better. We were only 15 minutes from landing, and from there 15 minutes until we get to the trauma center. All would be fine.

We landed. Taxiing in, I saw an awaiting ambulance, and I was happy. One last quick assessment and he appeared to be stable. Pupils were equal and reactive, the initial rocuronium had worn off, and his vitals were okay, except for the outlying SPO2 of 91% and a blood pressure on the lower end of normal. The mantra of “don’t just do something, stand there” popped into my head. Let’s get him to the trauma center. We prepared to move him out of the aircraft via a ramp through our cargo door and onto EMS’s stretcher. The pilot threw our medical bags in the ambulance.

Panic. Panic is what I did. As we moved him down the ramp, there was a sudden gurgling noise and the next thing I knew, the entire ventilator circuit was filled with red colored sputum. My immediate reaction was to disconnect the vent circuit, let both the ET tube and circuit drain, and then BVM the kid. But all that did was cause projectile sputum to fly all over myself and Sara.

Panic. All I could do is think that for every second this kid’s ET tube was filled sputum, he wasn’t oxygenating. We had to do something now. I was in charge at this moment and I couldn’t hesitate. I foresaw having to extubate and re-intubate the kid. I needed familiarity. “Get him into the ambulance now” was all I could think. We attempted to ventilate him manually, but no luck. Too much sputum. We got him in the ambulance. The ground Paramedic, whom I had worked with before, was also a Respiratory Therapist. We suctioned. Too much sputum. We ventilated. Too much sputum.

Oxygen saturations are 70%. What do we do? Extubate? It’s in the trachea, I know that. But what I don’t know is where the fluid is coming from. Sara and ground Paramedic have a plan and they’re working to get this kid’s airway clear. We were already moving towards the trauma center with lights and sirens. I called up the trauma center ED on EMS’s radio: “This is medevac hotel hotel with the peds trauma from (outside city name). We are inbound with a 10 minute ETA. If we’re not already stopping in the ED, we need to, we have a loss of airway.” They copied and mobilized. I couldn’t clear my mind. Where is this fluid coming from? We have no available PEEP valve for the bag mask, how else can we get rid of this fluid? I didn’t know, but in that moment we tried. We suctioned. We ventilated. Suctioned. Ventilated. The kid was turning dusky. This is it, I thought. This kid is going code from hypoxia. Suddenly, we hit the ambulance bay and I’ve never been more grateful for both the ground ambulance and flight crews who had been dropping off patients who came to help. Into the trauma bay and the ped’s team went to work. Straight to the OR with the kid still on our equipment. Everyone was asking questions but I just didn’t have the mental capacity to respond. I was simply exhausted.

So what happened, and how do I prevent this from being me? Read part 2: Neurogenic Pulmonary Edema to find out!