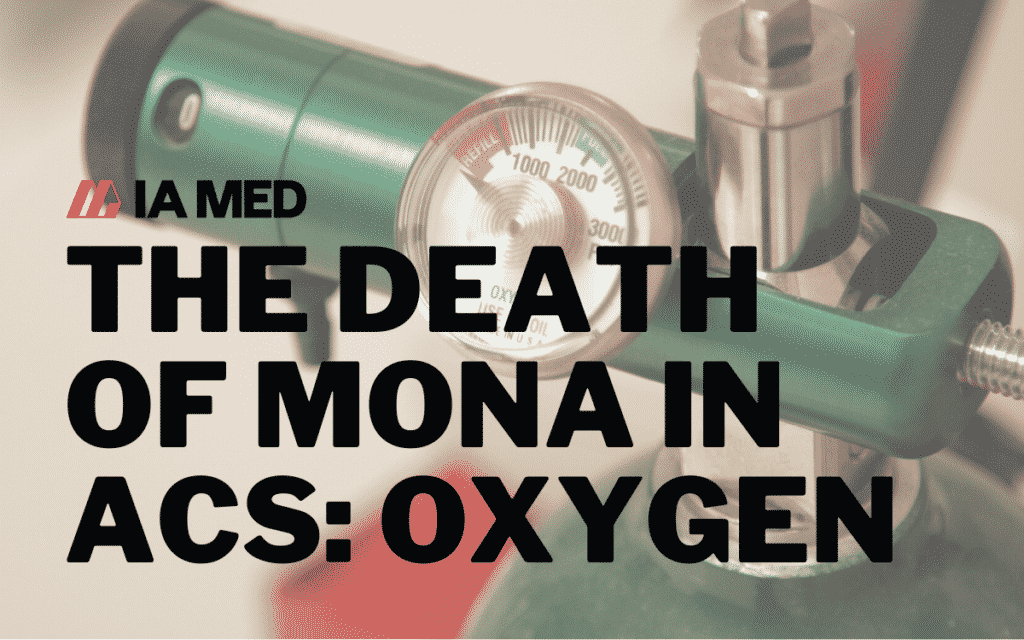 Background: The first report for supplemental oxygen for angina was in 1900, and since then oxygen therapy has been a commonly used treatment of patients with ST-Elevation Myocardial Infarction (STEMI).  The reason for this is the belief that supplemental oxygen will increase oxygen delivery to ischemic myocardium and help reduce myocardial injury.  This belief is based on lab studies and older clinical trials, but there have been other studies that suggest potential adverse physiologic effects of supplemental oxygen in acute coronary syndromes (ACS) (i.e reduced coronary blood flow, increased coronary vascular resistance, and production of reactive oxygen species) causing vasoconstriction and reperfusion injury. Taking all this information together there is a lot of uncertainty over the utility of routine supplemental oxygen therapy in acute myocardial infarction.

What They Did: This was a randomized clinical trial performed by Ambulance Victoria and 9 metropolitan hospitals in Melbourne, Australia. The authors compared supplemental oxygen therapy (facemask at 8L/min) vs no oxygen therapy in normoxic patients with STEMI (if O2 sats fell <94%, patients received 4L/min NC or facemask 8L/min). The primary endpoint was myocardial injury measured by peak cardiac troponin I and CK levels.

Exclusion: Patients were excluded if they had O2 saturations <94%, had bronchospasm requiring nebulized beta-agonist therapy, O2 administration prior to randomization, altered mental status, a plan to transport to a non-participating hospital, and deemed not to have STEMI after physician assessment at the hospital.

Results: 638 patients were randomized for the study of which 441 had a confirmed STEMI.

Limitations: This study was not powered for clinical endpoints (i.e. in-hospital recurrent myocardial infarctions, major cardiac arrhythmias, and mortality) but instead looked at surrogate cardiac biomarkers and LV infarct size. Additionally, mortality rate (4.5 to 8%) was very low in this trial.

Discussion: Many believe that routine administration of supplemental oxygen in normoxic patients with STEMI reduces psychological and physiological stresses, but in this study, there was no difference in chest pain scores or the requirement for additional opioid analgesics.

What They Did: This was another randomized clinical trial of 6629 adult patients, aged >30 years, with symptoms suggestive of AMI for less than 6 hours with an O2 saturation > 90% and either EKG changes indicative of ischemia or a positive troponin T who presented to ambulance services, Emergency Departments (EDs), coronary care units or a catheterization laboratory at a participating hospital (35/69 Swedish Hospitals participating in the SWEDEHEART Registry). The authors looked to compare supplemental oxygen (6L/min) versus ambient room air. The primary outcome was death from any cause at 1 year.

Strengths: Unlike the prior AVOID trial, the endpoint is patient-centered (i.e. death).

Limitations: Blinding was not performed as pressurized air was not available at all sites and a single country study leads to questions of external validity (homogenous population)

Bottom Line of DETO2X-AMI Trial: The use of supplemental oxygen does not appear to offer any benefit to patients with acute myocardial infarction with O2 sats ≥90%