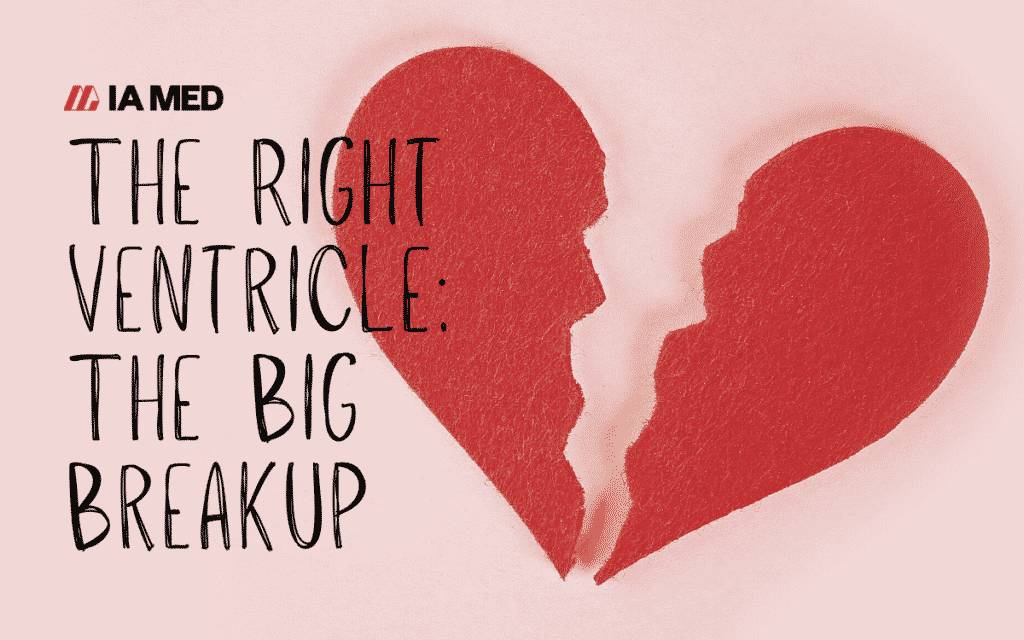 The Right Ventricle: The Big Breakup 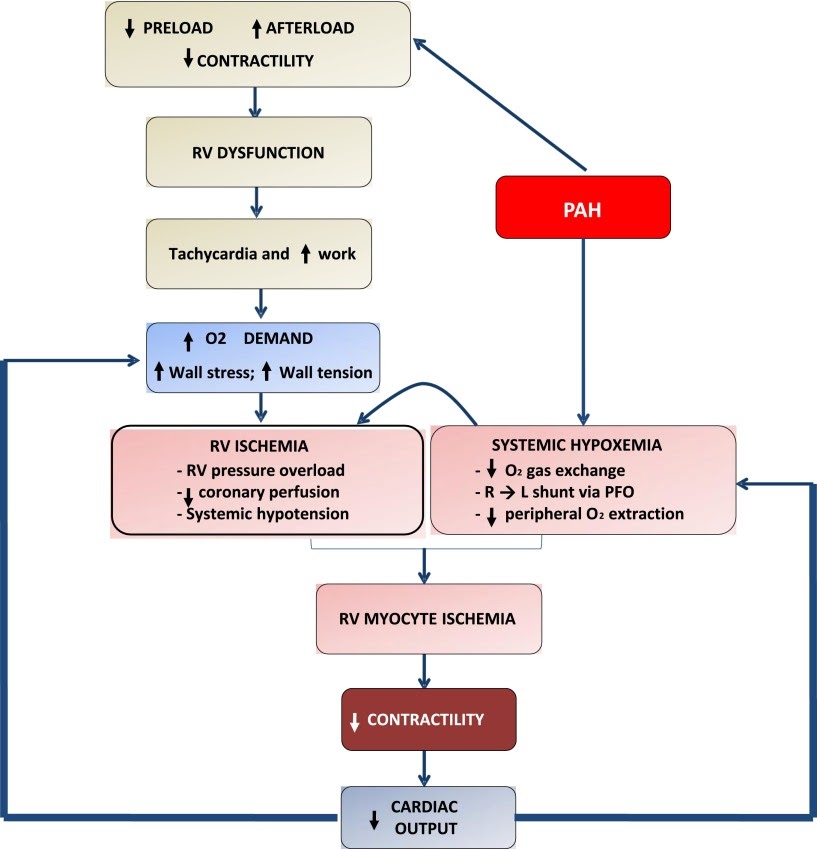 The Problem: When a patient develops a pathology that increases RV afterload, it initially reveals itself as RV dilation, but the amount of stretch to accommodate increasing pressure is limited and eventually the pressure will build. As the RV stretches, it increases free wall tension, which limits the coronary perfusion while the RV has increased oxygen demand as it attempts to pump against the increased afterload. Let’s dive into some specific causes of acute increased RV afterload (this is just a few of the more common causes, honestly at this point my brain is about to fall out of my doggone head, okay?):

The Solution: Ultimately, the definitive treatment for reducing RV afterload is to address the specific problems, but the clinician also needs to manage the symptoms caused by RV strain. One of the best supportive measures used to manage the RV failure patient is to initiate ECMO, but that is not an option for EMS and is only available in fewer than 300 hospitals in North America.

Cor pulmonale induces marked hemodynamic instability that progresses quickly, so treatment must be swift. Most pressors that we give induce systemic vasoconstriction, but we want to avoid that in the case of RV failure because we want to encourage coronary blood flow. Remember that the RV is perfused during the entire cardiac cycle, but RV coronary perfusion is reduced in RV failure due to free wall tension. Constricting these vessels would throw gasoline on the hypoperfusion fire. AS WELL, inducing systemic vasoconstriction is going to worsen pulmonary vascular resistance. *tire screech* Please find an alternate route.

Let’s look at our pressor options, along with medications to reduce pulmonary hypertension and discuss each one:

Phenylephrine (neo-synephrine) is a sympathomimetic with chemical structures similar to epinephrine and amphetamines. It acts directly on alpha-1 adrenergic receptors, causing vasoconstriction and will cause increased RV afterload by tightening pulmonary vascularity and will also constrict coronary arteries. Not a great choice for the RV failure patient.

Norepinephrine (levophed) is a naturally occurring catecholamine produced by the adrenal gland, but we can also give it exogenously. Like phenylephrine, it also acts directly on the alpha adrenergic receptors to induce vasoconstriction but it has been shown to worsen pulmonary hypertension less than phenylephrine. So, less bad than neo, but let’s keep looking for a better option.

Epinephrine (adrenaline), also a natural catecholamine produced by the adrenal gland, stimulates both alpha and beta adrenergic receptors, and clinically it increases blood pressure by constricting vasculature, but it induces bronchodilation. It also offers inotropic support and increases cardiac output, so this could be a good choice for our patient.

Vasopressin (ADH) acts on V1 receptors to cause vasoconstriction to improve blood pressure and on V2 receptors to increase intravascular volume by retaining fluid instead of diuresing it. Clinically, it alleviates systemic hypotension but does without worsening pulmonary hypertension. Vasopressin is a great choice for the RV failure patient!

Dobutamine is a beta-1 adrenergic receptor agonist that improves cardiac contractility and increases cardiac output, but it can drop blood pressure so you’ll be robbing Peter to pay Paul. Be sure to pay Paul.

Milrinone (Primacor) is a positive inotrope that can assist with strengthening the pumping abilities of the heart, but it will also cause systemic vasodilation, so, again, make sure you don’t augment contractility at the expense of perfusion.

Dopamine is another naturally produced catecholamine in our bodies, but we can give it exogenously to increase the rate and force of the heart, which will increase cardiac output. In normal settings, dopamine acts as an inhibitor to norepinephrine release, therefore inducing vasodilation. BOLO for hypotension if you use this drug to support your cardiac output!

Inhaled epoprostenol is a great choice in the setting of RV failure specifically in ARDS. When delivered continuously via nebulization (it has a short onset and a very short half-life, so you need to keep this one going), it focuses its vasodilatory effects solely on the pulmonary vasculature and it promotes the production of surfactant. Read up on this line of treatment, it’s cool as heck!

Finally, I want to discuss mechanical ventilatory strategies for the RV failure patient. It will be essential to keep intrathoracic pressures as low as possible to avoid further irritating the RV. If there are unnecessarily high pressures induced by excessive tidal volumes, blood return from the inferior vena cava will be impeded. Consider using an ARDS approach of smaller tidal volumes (4mL/kg IBW) with higher rates (check out my blog on minute ventilation-https://training.iamed.us/learn/article/minute-ventilation).
.

Delaying treatment of RV failure can put these patients in peri-arrest states in short order, so do some in-depth studying (this three part series doesn’t even qualify as an introduction to RV failure management!) and put yourself in a position to recognize right heart failure early, identify the cause, and use the tools available to you to stand between your patient and death. You are going to war for your patient, make sure you have the knowledge, the skills, the resources, and as many tools as possible to be a successful warrior of healthcare!

Also, sorry things didn’t work out with your imaginary girlfriend. She was too high maintenance, anyway. 😉 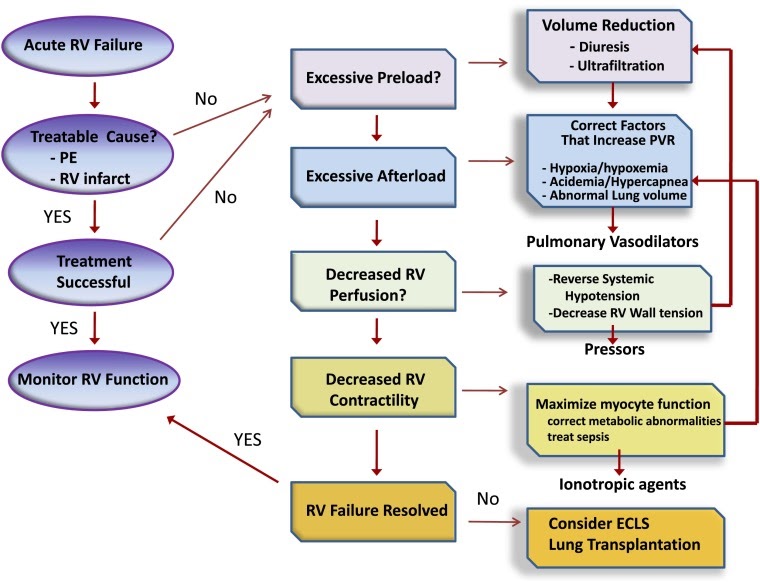 This series was inspired by a ridiculously good podcast over at the EMCrit page and I cannot pretend to do her lecture justice with my blog. Hop on over and take a listen to Sara Crager discuss RV failure management. https://emcrit.org/emcrit/right-heart-sara-crager/